We discuss Trump’s made for Fox TV campaign kick-off event in the wake of his trumped up fight with Iran. Will Trump decide that releasing the dogs of war is to his political advantage? Next, we dig into the critical state budget votes scheduled for next week, the growing right wing opposition to the GOP budget, and the options available to Governor Evers should a terrible budget reach his desk. We preview next Monday’s BadgerCare Expansion statewide Day of Action (see details below). Finally, the panel dives into the Elizabeth Warren/Bernie Sanders dynamic in the Democratic primary election, looks ahead to the first Democratic  presidential “debate,” and discusses Beto O’Rourke’s LBJ like ascent from political unknown to presidential contender.
Listen Now – Episode #397
Download MP3
Press Clips
END_OF_DOCUMENT_TOKEN_TO_BE_REPLACED

The big con continues with news that Foxconn awarded contracts supposedly reserved for Wisconsin-based companies to firms headquartered in Connecticut and England. END_OF_DOCUMENT_TOKEN_TO_BE_REPLACED Attend Medicare for All Rally in Chicago Saturday, June 8th! Citizen Action is turning up the public heat on the Republican legislators who are standing in the way of Governor Evers’ plan to expand BadgerCare to 83,000 working people. To intensify the impact of our grassroots organizing, Citizen Action launched a statewide radio and digital ad campaign this week.

LISTEN to the radio ad! END_OF_DOCUMENT_TOKEN_TO_BE_REPLACED This Monday was Western Wisconsin’s turn to be heard at the Joint Finance Committee public hearing on the state budget in River Falls. Members traveled from great distances to speak at the hearing. END_OF_DOCUMENT_TOKEN_TO_BE_REPLACED We are joined by state representative Jonathan Brostoff to discuss Gov. Evers’ conclusion that Foxconn is unlikely to hire 13,000 workers and his decision to renegotiate the contract. We review the new UW-Madison study that found accepting Medicaid money would save state residents $100 million a year, on top of savings to the state savings. We also talk about the Trump MAGA rally coming to Green Bay, the Koch Brothers’ “astroturf” state budget campaign, and Congressman Sean Duffy dishonestly sneering at the Green New Deal. 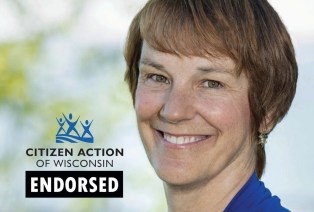 The election to replace retiring Justice Shirley Abrahamson is on Tuesday, April 2, 2019. Judge Neubauer faces Walker-appointed judge Brian Hagdorn in the election. The ultra-conservative Hagedorn has made news during the campaign for scandalous and hateful writings revealing his bigotry and right-wing ideas. 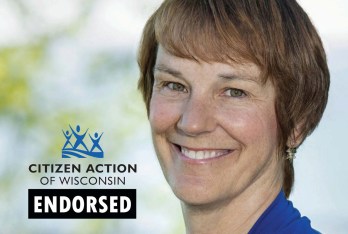 The election to replace retiring Justice Shirley Abrahamson is on Tuesday, April 2, 2019. Judge Neubauer faces Walker-appointed judge Brian Hagdorn in the election. The ultra-conservative Hagedorn has made news during the campaign for scandalous and hateful writings revealing his bigotry and right-wing ideas. END_OF_DOCUMENT_TOKEN_TO_BE_REPLACED