The COVID-19 induced economic crisis requires an urgent and large scale federal response. The duration of the pandemic, which is growing in Wisconsin and most of the country, and the persistent depression-like economic repercussions it is producing, could not have been fully anticipated in March when the last large scale relief passage was enacted. In addition, most of the minimal relief targeted to middle class and working people is set to expire July 25, including the enhanced unemployment benefits keeping tens of millions of working families afloat.

Tammy Baldwin’s Jobs for Economic Recovery Act would create a national subsidized jobs program to create hundreds of thousands of frontline jobs reminiscent of the Community Conservation Corps from the New Deal. The Rebuilding Main Street Act extends the $600/week unemployment stimulus payments to those out of work and applies the increased benefit to work-share programs, which subsidize workers for wages lost as a result of a company-wide reduction in hours. These two bills would prevent layoffs and put jobseekers back to work. Senator Baldwin is working with a coalition of Senators pushing for the inclusion of these provisions in the next COVID-19 relief package, expected to be considered this month.

In Citizen Action’s view, a large scale publicly-subsidized jobs program would also be an opportunity to initiative the green transition we need to prevent a climate genocide, and to employ people in the most depressed areas and constituencies, including people of color and folks who live in depressed rural regions.

“The ongoing public health and economic crisis in Wisconsin demands real solutions from Washington. We have to prevent further layoffs in our communities and put Wisconsinites back to work, so I’ve introduced legislation to do both,” said Senator Baldwin. “I’m proud to have strong partners like Citizen Action Wisconsin in this effort as we work together to support workers and businesses in our recovery from this economic crisis. Our reforms present a better way forward and we must seize it now.”

“In this great national emergency, the American people deserve and expect bold leadership up to the scale of the crisis,” said Robert Kraig, Executive Director of Citizen Action of Wisconsin. “As working and middle class families confront employment conditions not seen in this country since the 1930s, they need both the continuation of the temporary economic relief enacted in March, and bold new investments in job creation that can only come from the federal government. We commend Senator Tammy Baldwin for stepping up with powerful policy proposals on the scale of the original New Deal. Her proposals, for which she is building support with a diverse coalition of Senators, are of the magnitude needed to address the current economic crisis, and lay the groundwork for a new economy needed to prevent a climate cataclysm, and extend opportunity to all those who have been shut out, especially people of color and the residents of depresses rural areas.”

Statewide: A day before the full Legislature begins voting on the state budget, Citizen Action members led a statewide health care day of action urging lawmakers to accept federal Medicaid money to expand Wisconsin’s popular BadgerCare program. Citizen Action members also trekked to Madison from across the state to lobby their legislators one last time before the big votes in the Assembly and Senate.
END_OF_DOCUMENT_TOKEN_TO_BE_REPLACED

STATEWIDE:  At a Capitol news conference and a media call today legislators, health advocates, addiction experts, and consumers released a new Citizen Action report showing that expanding Medicaid (BadgerCare) would have a sizable and beneficial impact on addressing opioid addiction for working Wisconsinites. This research is timely both because deaths from opioid continue to climb (In 2017, there were 926 overdose deaths involving opioids in Wisconsin) and because the Legislature’s Joint Finance Committee is expected to take an initial vote on Thursday on BadgerCare expansion. Watch Wisconsin Eye’s coverage of the Capital news conference here. Listen to audio of the media call here. END_OF_DOCUMENT_TOKEN_TO_BE_REPLACED

The growing movement to establish health care as a fundamental human right achieved a major milestone this week when the Rules Committee of the U.S. House of Representatives conducted the first ever hearing on Medicare for All. Because to the incredible work of our members to make us a health care leader, and the growing influence of our national affiliate People’s Action, Citizen Action of Wisconsin had a direct role in this historic hearing. END_OF_DOCUMENT_TOKEN_TO_BE_REPLACED

On a media call on Oct 31st, Citizen Action of Wisconsin and the Wisconsin Federation of Nurses & Health Professionals released a new analysis which has major implications for the high profile health care debate in the 2018 election. We were joined on the audio news conference by State Senator LaTonya Johnson and State Rep. Chris Taylor. Listen to the entire audio here.

The analysis, based on just released federal data crunched by Citizen Action, shows that Governor Walker’s refusal to build on the Affordable Care Act is forcing Wisconsinites to pay thousands more for health insurance on the individual market. In some high cost regions of the state, Wisconsin families are paying over $24,000 per year more per year! END_OF_DOCUMENT_TOKEN_TO_BE_REPLACED

Statewide: Citizen Action of Wisconsin members across the state are applauding Governor Evers for including BadgerCare expansion in his state budget. This great health care advance will be formally announced to a joint session of the Legislature tonight in the Governor’s first State Budget Address. END_OF_DOCUMENT_TOKEN_TO_BE_REPLACED

Milwaukee: Citizen Action of Wisconsin is joining the Roosevelt Institute and People’s Action in  releasing “Profit Over Patients: How the Rules of our Economy Encourage the Pharmaceutical Industry’s Extractive Behavior.” END_OF_DOCUMENT_TOKEN_TO_BE_REPLACED 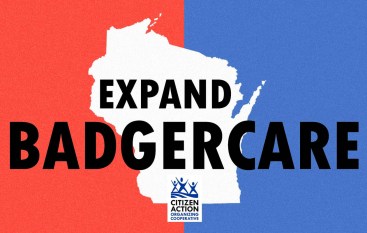 Statewide: In response to the first State of the State Address of Tony Evers, Citizen Action of Wisconsin members across the state applaud the Governor’s firm commitment to including BadgerCare expansion in the state budget.