Wisconsin GOP Representative Jim Sensenbrenner has joined “more than a dozen House Republicans who have already announced their retirements. … it’s yet another sign that Republicans are pessimistic about their chances to win back the House majority …” (Politico). Earlier, Wisconsin GOP Representative Sean Duffy said he was resigning in September because his expected ninth child has a heart problem. Hopefully, medical intervention will remedy this difficult situation. 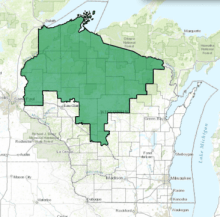 “The race to fill (Duffy’s) vacated 7th Congressional District (CD) seat, both in the special election (April?) and in November 2020, is sure to be nationally watched, given the rural Wisconsin district’s importance to … Trump’s reelection hopes” (Wisconsin Public Radio). Duffy’s predecessor, Wisconsin Democratic Representative Dave Obey, won the seat in an April 1969 special election (GOP Representative Melvin Laird had resigned to become Nixon’s Secretary of Defense). Obey held the seat until he decided not to run for reelection in 2010.

Can a Democrat succeed Duffy? Yes, if the Democratic campaign is run on bread-and-butter issues. That means listening and talking with farmers, middle and working-class folks about the catastrophic impact of Trump’s trade wars, health care and retirement security. Avoid identity group politics, we are all Wisconsinites. And, embrace a big-tent Democratic Party vision that speaks to rural Wisconsin.

Trump has again escalated his trade war with China. The Chinese retaliated with more tariffs on U.S. goods and will continue not buying U.S. (Wisconsin) farm products. 7th CD cranberry, dairy and ginseng farmers are struggling. Wisconsin Democratic Senator Tammy Baldwin said: “Wisconsin has been hit particularly hard by the trade wars. Our state has lost over 1,600 dairy farms since (Trump) took office. The idea that other countries have identified products like cheese or cranberries or ginseng … for retaliatory tariffs has hit us hard. … But we also have … oversupply issues; we have had horrible experiences with the weather recently; and the price of milk has been low … .” A heartfelt political roadmap for the 7th CD.

Finally, I would strongly urge any Democrat running in the 7th CD to embrace Duffy’s vote for the Butch Lewis Act: “The measure would help pension plans (covering over a million, including 25,000 Wisconsinites) sponsored by several employers and managed by a collective bargaining agreement by giving (low-cost loans) to insolvent plans so they can continue to distribute the promised retirement benefits” (Washington Post).

Yes, a Democrat can succeed Duffy.

One Reply to “Bill Kaplan: Can a Democrat succeed Duffy?”