Each regional organizing co-op will be having a meeting within their region at the same time.

The meeting will feature a “year in review” from all the co-ops, 2019 member awards, and then turn our meeting back to the regional co-ops. This meeting is open to non-members as well as members

On Tuesday, December 3rd, About 15 members of the Citizen Action Northwestern Co-op joined forces with other community members to urge the Eau Claire County Board to vote NO on the resolution to make January 26, 2020 – February 1, 2020 “School Choice Week.”

This resolution would celebrate Wisconsin’s Republican-led voucher program that has siphoned off taxpayer money to private, religious schools leaving public schools with lack of funding and scrapping for resources.

Several members spoke, including Chris Humboch-Boyle, who leads the education issue team within the co-op.

The resolution failed at the end of the night when the board voted 24-2 to not accept the proclamation.

We are thrilled to announce that we officially have 250 activists pledged to join our co-op in Southwest Wisconsin. We have supporters in La Crosse County, Monroe County, Vernon County, Adams County, Sauk County and Dane County.  Now we can start to mobilize and organize to create real progressive change!

If you have not fully joined the co-op please do so at this link.

We still want to include as many more activists as possible.  If you know anyone who might be interested in joining Citizen Action of Wisconsin please let Ben know ASAP.  He can be reached at [email protected] or 608-386-2847. 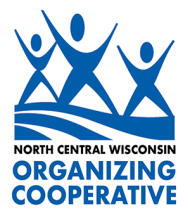 As you can imagine, 2020 is going to be one crazy year for all of us, and that is why the Co-op needs you. In the New Year, we will be focused on 3 top issues, in addition to the electoral work that we do. Those top 3 issues are Healthcare For All, Movement Politics (which includes Fair Maps, Census Work, Voter Registration, Seeking and Supporting Candidates, etc.), and Green New Deal initiatives. The last one will be a wide umbrella, like replicating work that has been done in other Co-op regions, or supporting the work of allied groups. And obviously, we have a whole slew of candidates throughout the region to support, at all levels.

Candidates from our Co-op have emerged to run for the 7th CD Special Election, Mayoral race in Wausau (and possibly Ladysmith), Wausau City Council, Marathon County Board of Supervisors, and Tomahawk School Board. Some of these candidates merely need your vote, but others may need help knocking doors, phone banking, or more. If we all stand together we are stronger!

We continue to work in collaboration with all groups that want to. In fact, many of these candidates that are running are the result of a candidate committee made up of several groups within the region. We can win our State back and continue to fight for what is right in our community, but we need you to do it!

Also, attending the Citizen Action Annual Meeting tomorrow in Wausau tomorrow at 12:30 is a great way to get a kickstart on this. This meeting will be at the First Universalist Unitarian Church, 504 Grant Street, Wausau, WI 54403. It begins at 12:30, with 30 minutes of social, and then at 1, we will be joining other Co-op members from around the State, to hear an address from Robert Kraig, and then a report from each Co-op region. Then, we will disconnect and break out into strategy groups to discuss the particulars of the top 3 priorities in 2020. It would be great to see you there! 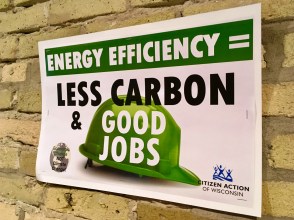 On December 3rd 2019 Powered up Baraboo held their first meeting and over 60 people came to show their support!  During this meeting four action teams were formed to focus on different issues such as schools, homes and businesses, green spaces and municipal actions.  During the course of the meeting ten homeowners signed up to receive information from Citizen Action of Wisconsin on how they can reduce their own carbon footprint by upgrading their homes with solar panels and other energy efficient upgrades.  Powered up Baraboo is committed to creating real action on locally to fight climate change.

Anyone in the Baraboo area interested in getting involved with Powered Up Baraboo should contact Judy Spring at [email protected].

Coffee and Conversation with Breana Stanley, the Northwestern WI Co-op Organizer for Citizen Action WI. Come talk about what’s concerning you in our region, statewide, and nationally. What you wanna work on, and anything else that you believe if necessary for Breana to know!

Citizen Action of Wisconsin will be sponsoring a viewing and group discussion about the movie “Dark Money” at the Commons in Viroqua on January 15th at 6:00 PM.  Dark Money is a political thriller that examines the greatest threat to American democracy; the influence of untraceable corporate money on our elections.  “Dark Money” uncovers the shocking truth of how American elections are bought and sold. This Sundance award-winning documentary is directed and produced by Kimberly Redd.

Citizen Action of Wisconsin is committed to restoring political power to the people rather than corporations.  “Dark Money” really explores the problem and how we can fix it. After the showing there will be a discussion. We hope everyone is able to attend and learn more.  RSVP for this showing here.

We discuss a series of violent incidents and threats of violence in Wisconsin high school this week and the reaction of elected leaders. We review a new study finding that a higher percentage of medical care in Wisconsin is wasteful and low quality. The study also concludes that if every primary care physician in Wisconsin provided the same quality of care the cost would be 30% lower. Claire educates us about nearly 700,000 SNAP recipients who will likely lose food stamp benefits under new Trump rule released this week. Finally, we welcome City of Eau Claire council member Kate Beaton to discuss the city’s new climate plan and their exciting goal to get to 100% electric cars.