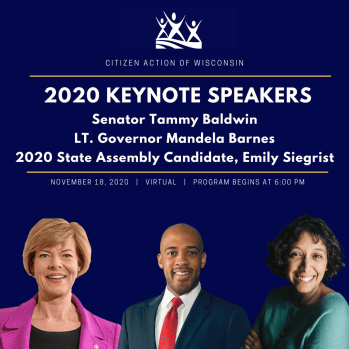 We won Wisconsin for Joe Biden and Kamala Harris, and now it’s time to celebrate and to plan for big progressive advances in 2021!

Join us for our first virtual fundraiser!

We will be joined by Tammy Baldwin, and Mandela Barnes to give perspective on the big victory and lay out a vision for transforming Wisconsin and America. Citizen Action co-op member Emily Siegrist will also join us to discuss her very close election defeat in a gerrymandered Assembly District. She will tell us why we must continue to pursue taking back the Legislature.

We’re excited to provide an evening of celebration and discussion with our members and speakers. We look forward to hearing our guest’s thoughts on how we can win guaranteed health care for all, a Green New Deal, dismantling structural racism, and other big issues on the table.

Secure your ticket today by visiting

The Governor and Lieutenant Governor will be holding a series of virtual state budget public listening sessions providing you with a unique opportunity to make your voice heard.

The first virtual budget listening session will take place next week Tuesday, November 17 at 6:00PM and will focus on Healthcare and Public Health.

This is a great opportunity to support making sure the Governor’s State Budget includes his 2018 campaign promise to expand access to healthcare to everyone by opening up BadgerCare as a Public Option to corporate healthcare.

We encourage you to discuss our state budget healthcare agenda:

TAKE ACTION: Contact your state legislators and tell them to publicly speak out against Trump’s scheme to overturn the will of Wisconsin’s voters

Our democracy is based on the idea that we pick our leaders. In the epicenter of America’s coronavirus epidemic, amidst barriers that make registering and accessing the ballot box a challenge for many, Wisconsinites did just that. This election season, we turned out in record numbers, from Milwaukee to Douglas County, and everywhere in between, to vote for the future that we have been working towards throughout this long year—a future where all of us count.

The people have spoken, and now our government must deliver on their demands. The campaigning and voting is over, and it’s time for the governing to begin.

Unfortunately, President Trump and too many Republicans are attempting to overturn the election and subvert the will of the 3 million-plus people who voted in Wisconsin.

We need to speak up and tell our elected officials in the state legislature that they need to publicly oppose Trump’s effort to overturn the Wisconsin election.

CONTACT your state legislators and tell them to publicly speak out against Trump and the GOP’s scheme to overturn the will of Wisconsin’s voters.

Statement in response to the Supreme Court’s hearing of the California v. Texas lawsuit to determine the constitutionality of the Affordable Care Act Citizen Action of Wisconsin released the following statement:

“COVID cases are surging in Wisconsin to new levels, setting new records for infection and putting Wisconsinites’ lives at risk. During the biggest public health crisis of our lifetimes, we need more and better health care for all people, not less. And yet, during this global pandemic, the United States is taking up the Trump and Republican backed California v. Texas lawsuit that threatens to take health care away from millions of Americans.

Rather than protect and expand health care or lower drug prices, President Trump spent four years trying to repeal the ACA, weaken Medicaid and Medicare, and breaking his promises about lowering drug prices. In the last month before the election, his top priority was not COVID relief and recovery, but instead he focused on packing the Supreme Court with another right wing judge that opposes the ACA.

In defiance of past precedence, the legal opinions of experts across the political spectrum who argue that this case has no merit, and the harmful impact of overturning coverage for over 20 million people as well as pre-existing condition protections for 135 million more, this court could refuse to uphold the ACA. That decision would have dire consequences for Wisconsinites. Experts estimate that 153,000 Wisconsinites could lose coverage, including 41,000 young adults on their parents’ coverage and 28,000 children. Furthermore, without the Affordable Care Act, between 883,000 and 2.4 million Wisconsinites with pre-existing conditions could be denied coverage or be discriminated against and face much higher costs.

For the sake of our democracy and our health, the Supreme Court must uphold the ACA as the law of the land and put aside partisan politics to act as a neutral arbiter in this case. The justices must prioritize sound legal judgement and the well-being of the nation over President Trump’s anti-health care legacy.”

Thank you to all the Driftless Co-op members who came out to volunteer, speak at, or attend all our local post election events! 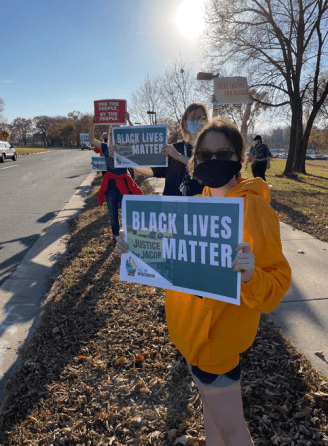 Just hours after Joe Biden was declared the winner of the 2020 Presidential Election activists gathered at Copeland Park in La Crosse for a rally calling on all of us to stay committed to creating the change that we want to see in the world.  This was a different event than your normal political rally.  Newly elected leaders, stand up comics, activist leaders, musicians and community leaders all presented to remind everyone that the work is never over!

Over 50 people gathered for this fun day of activism, comedy and music in the park.  Special guest speakers included Francesca Hong (who had just been elected to the state assembly) and super star, Wisconsin, progressive activist, Nada Elmikashfi made the trip from Madison to remind Driftless region progressives know that they are not in this alone!  The day ended with everyone gather lining up with signs along Copeland Ave to let the public know that we are not done fighting!  A very special thanks to every speaker, entertainer and volunteer who made the day possible: 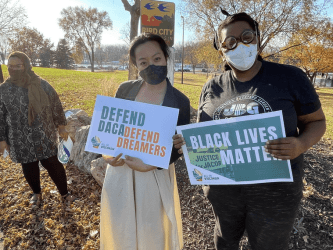 The rest of 2020 for the Driftless Co-op 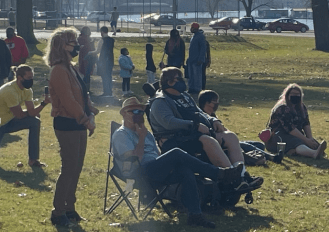 This election was a huge step forward, but it is not the end of our work to transform Wisconsin. We need everyone to come together to build energy for the big battles ahead in 2021 to win structural reform in Wisconsin and in Washington.

Moving forward Citizen Action of Wisconsin remains committed to creating change on the local, state and federal level.  As we enter the last few weeks of 2020 we will be working with our member leaders to lay the groundwork for the future.

In December we will be hosting our annual statewide membership meeting.  That is where we will be electing our board of directors.  It is so important that we elect a Driftless Co-op member on the board.  We need rural representation from this part of the state! 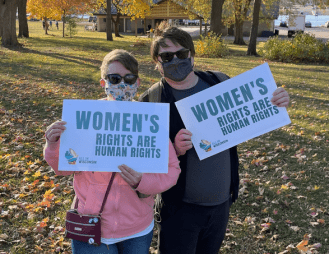 There is also a huge fight for a people’s budget in the state house in 2021.  We need to identify the issues/programs that need to be funded here in Wisconsin.  We also need to include the expansion of Badgercare into that fight.

We also need to identify progressive candidates for local office.  There are tons of local races next spring for mayoral seats and city council seats.  Local elected leaders have a huge impact on their communities.  We want to help our local, progressive leaders run winning campaigns.  We want to help them become true progressive leaders, creating a better tomorrow for their communities.  If you know someone interested in running for local office in 2021 please have them reach out to Ben Wilson ASAP at [email protected].  If you would like to schedule a meeting with the Driftless Co-op organizer, Ben Wilson, please use this link to Book A Meeting Now.  Whether you are a long standing member wanting to touch base about the future, someone looking to get more involved in the co-op, someone new to Citizen Action of Wisconsin looking to learn more or someone thinking of running for local office Ben would like to talk to you!

More big mobilization, calls to action, and announcements are coming soon!  Thank you all so much for everything you did to help defeat Donald Trump.  Now as we look forward to the future.  Take a minute for yourself, rest and get ready because the fight for tomorrow is never done! 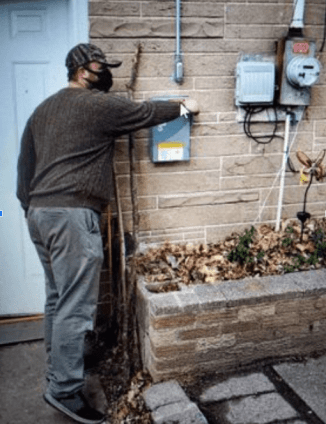 Citizen Action’s North Central Wisconsin Organizing Co-op kicked off a new drive to energy retrofit homes for conservation and renewable energy. The program lines up low interest loans for our members, and commits them to work towards a large scale climate transition.

A couple of years ago, a member-led campaign that worked to promote a type of financing called PACE (Property Assessed Clean Energy), led members and allies to ask an obvious question…How do we make it easier for homeowners to access energy upgrades, such as solar panels. PACE only has a history of working for businesses, not homeowners. Citizen Action staff were then involved in a process where they were able to work with financial institutions to offer something very similar to homeowners. Basically, if a person has a 15-year or 30-year mortgage, they can refinance their mortgage (this is a great time to do this because interest rates are at an historic all time low), and bundle in solar panels and other home energy upgrades to lower their energy bills and permanently reduce the carbon footprint of their home.

You can sell the home at any time after these upgrades (with a higher value) and there is a law on the books in Wisconsin that exempts property taxes from increasing as a result of the addition of solar panels. Over the past few months, we have been working with homeowners in the region to do these upgrades, and help them navigate the refinancing process.

Yesterday, the first two homes to do the solar upgrades in Wausau, “flipped the switch” to officially connect their solar arrays to their home and the grid. You can see a segment about this on Newschannel 7 WSAW. If you would like to sign up to do this for yourself or share it with others, you can do that here, and someone will follow up with you shortly.

Citizen Action’s Director Robert Kraig was on the Stan Milam radio show for 45 minutes to discuss the big Affordable Care Act repeal case before the U.S. Supreme Court, the prospects for prescription drug reform, the Biden/Harris health care plan, and other health care issues. Listen to the interview here.

As COVID-19 surges dangerously out of control, we look forward to national and state course corrections. Next, we discuss the prospects for national healthcare reform in the coming Biden/Harris Administration. We evaluate Gov. Evers’ new COVID-19 Executive Orders, as health care workers and hospitals are on the brink. We preview the 2021-22 state budget process and the importance of pushing to include BadgerCare Public Option and other structural reforms in Governor Evers’ next two year budget. 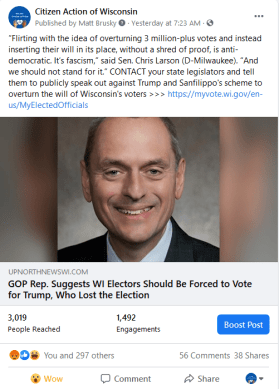