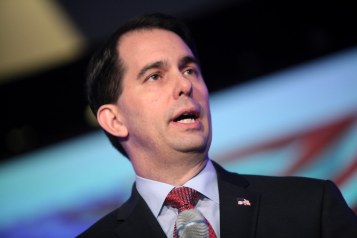 Scott Walker’s declaration last week that he would protect people with pre-existing conditions from discrimination is in sharp contrast to his actual record as governor and any policy proposal he has made to date, raising the specter that he is deliberately misleading voters in order to deflect a major campaign issue.

According to a report from Associated Press over the weekend “Gov. Scott Walker pledged Friday to ensure those with pre-existing conditions would be covered in Wisconsin if the Affordable Care Act were repealed.”

However, Walker’s positions and actions on the Affordable Care Act (ACA), and his record as Governor, stand in sharp contrast to this pledge. Approximately 2.4 million Wisconsinites have a health condition that could be designated a “pre-existing condition” by insurance companies.

Walker has repeatedly called for the unconditional repeal of the ACA over the last 8 years, without any direction to Congress to continue to outlaw pre-existing condition discrimination. Walker recently authorized Attorney General Brad Schimel to join a Texas lawsuit that would, if successful, strike down the pre-existing conditions protections in the ACA, finding them to be beyond the power of the Federal Government.

Walker has repeatedly and strongly supported repealing (and striking down) the entire ACA, including its prohibitions on discrimination against people with health conditions. The outlawed insurance company practices include denial of coverage, revoking coverage after a patient is diagnosed with a serious illness, charging excessive rates that price people out of coverage, and annual or lifetime limits. Walker would also repeal the ACA’s large tax credits which make coverage much more affordable for people with serious health conditions who are unable to work and have to purchase insurance on their own.

In addition, Walker has both enacted and supported a series of state policies that allow discrimination against people with pre-existing conditions.

First, the Waker Administration used authority from the Trump Administration to specifically authorize the continued sale of “lemon” health plans which are banned in states like Minnesota. According to the administration’s own documents these plans are exempted from the ACA’s prohibition against “pre-existing condition exclusions or other discrimination based on health status.” These discriminatory plans continue to be a significant part of the Wisconsin insurance market.

Third, during the Congressional debate over ACA repeal last year, Walker floated the idea of allowing insurance companies to charge higher rates to people with pre-existing conditions. He also proposed that Wisconsin allow discrimination, and go back to the days when only patients who have enough money to afford an expensive high-risk pool could get insurance coverage on their own. The policies were inferior to the coverage guaranteed by the ACA. For example, Wisconsin high risk pool plans had lifetime limits, which is another way to discriminate against people with cancer and other serious diseases.

The stated bases for Walker pre-existing condition “pledge” is a bill he touted in his State of the State Address, but has not been acted on by the Legislature. Walker falsely claims it would prevent insurance companies from discriminating based on pre-existing conditions, should the governor’s desire to see the ACA repealed or struck down ever came to pass. To the contrary, the bill would allow health insurance companies to trample on the rights of people with health conditions by charging exorbitant rates to anyone who has a gap in coverage. This provision would in practice re-legalize discrimination against people with health conditions who lose their insurance. This happens often to people with serious illnesses, such as cancer, who are unable to work and do not have the resources to pay high insurance premiums. Making the threat even worse, Walker supports removing the ACA tax credits that make health insurance more affordable for people with moderate incomes.

“Given the life and death importance of the issue, it is vitally important that voters know where candidates stand on pre-existing condition discrimination. We are very concerned that Governor Walker is attempting an immoral bait and switch where he promises to protect people with pre-existing conditions with no actual intention of doing so,” said Robert Kraig, Executive Director of Citizen Action of Wisconsin. “After the 2016 election a shocking number of candidates reneged on their public commitments to protect people with pre-existing conditions, threatening the lives and life savings of millions of Americans. Walker owes it to the people of Wisconsin to renounce his previous positions and explain exactly how he will guarantee that Wisconsin never goes back to the days when it was legal for insurance companies to discriminate based on health conditions.”

This year Citizen Action of Wisconsin started working intensively on the growing crisis in access to long term care, working closely with new national partner Caring Across Generations. Adding momentum to the emerging campaign the Citizen Action Western Wisconsin Organizing Co-op put on a major forum on the crisis in long term care Thursday night in Lake Hallie (near Chippewa Falls). The event drew over hundred people who packed the local Eagle’s Club on a stormy night. In the main presentation Breedlove and Zander discussed in depth a series of very disturbing statistics and long trends which show a deepening crisis in access to long term care driven by an acute and growing shortage of caregivers. Amazingly, 95% of seniors and people with people with disabilities who rely o long term care to live independent and fulfilling lives have trouble finding caregivers, and 85% did not have enough workers to fill all their approved hours, putting them at risk for avoidable injuries. Because of the aging population and the growing numbers of people with disabilities who are able to live longer lives, the crisis will intensify unless there is a dramatic public intervention.

This worker shortage is a result of appalling low wages and benefits for long term caregivers. The situation is so bad that 51% of personal care workers rely on BadgerCare, food stamps, and other public benefits, and annual turnover rates are over 50%. Also long term care workers routinely turn down additional hours to stay under the BadgerCare eligibility limit, choosing to live in poverty in order to get access to health care. Zander outlines a series of reforms that aging and disability rights leaders would like to see included in the next state budget, including major pay raises for caregivers and a BadgerCare public option for health care access.

Kraig pointed that the long term care crisis is an excellent opportunity for Citizen Action members to enhance the organizing we are already doing on health care reform and economic justice. He said Medicare for All and Universal Long Term Care are both needed to achieve an ethical health care system. Kraig pointed out that making long term care careers good family supporting jobs with benefits would also dramatically expand economic opportunity and prosperity in every Wisconsin community. There is an escalating need for workers and these jobs cannot be outsourced. He also pointed out that the appalling low pay for caregivers stems from ongoing gender discrimination at the systemic level. Professions associated with women are traditionally paid much less because their work is undervalued compared to male dominated professions. In fact, 90% of caregivers in Wisconsin and women, and a high percentage are women of color in many parts of the state.

If you are interested in getting involved in this Citizen Action’s long term care campaign, please contact Kevin Kane, [email protected]