Citizen Action members volunteered in texting and phone banking programs in many of the primary races, making thousands of voter contacts.

In AD 90, Citizen Action co-op member Kristina Shelton ousted incumbent Staush Gruszynski with 79% of the vote. Gruszynski was embroiled in a sexual harassment scandal and had been barred from the Democratic caucus and stripped of committee assignments. She will face Republican Drew Kirsteatter in November for the historically Democratic district in Green Bay.

Citizen Action co-op members played key roles in supporting Kristina, including volunteering a lot of hours to talk to voters. Thanks to all the hard work of our Northeast co-op members.

“Our job now is to move forward to the November general to keep this district blue, to work hard for other campaigns and other candidates in northeast Wisconsin and around the state, and to really work hard to defeat Trump in November,” Shelton said in a Facebook video Tuesday night. “I ask you to join us.”

In addition, our paid full time deep canvass phone program made thousands of calls to voters SD 30 and AD 96, where both endorsed candidates won.

In AD 96, Citizen Action candidate Josefine Jaynes won a surprisingly wide victory over Tucker Gretebeck with 56% of the vote. The 18 year old Jaynes will now go on to compete against Republican incumbent Loren Oldenburg. This seat is a potential Democratic pick up in 2020. Please contact organizer [email protected] to see how you can help Josefine win the general election.

The new North Side Rising co-op also made hundreds of calls in support of AD 17 Supreme Moore Omokunde and AD 8 JoAnna Bautch.

In AD 17 Citizen Action organizer and Milwaukee County Supervisor Supreme Moore Omokunde was also a big winner on primary night with 49% of the vote in a three way primary.

Supreme is a leader on implementing a racially equitable Green New Deal in Milwaukee County and will bring his passion for the issue to the State Capitol. We are very excited to work with Supreme in the Assembly.

We are deeply disappointed that JoAnna Bautch and Tomika Vukovic did not win their primary elections. Both ran strong campaigns against highly qualified candidates and we thank them for being progressive community leaders and for running for elected office.

We are extremely proud of all the candidates that did win this week. Now on to the big event, the November 3rd general election. 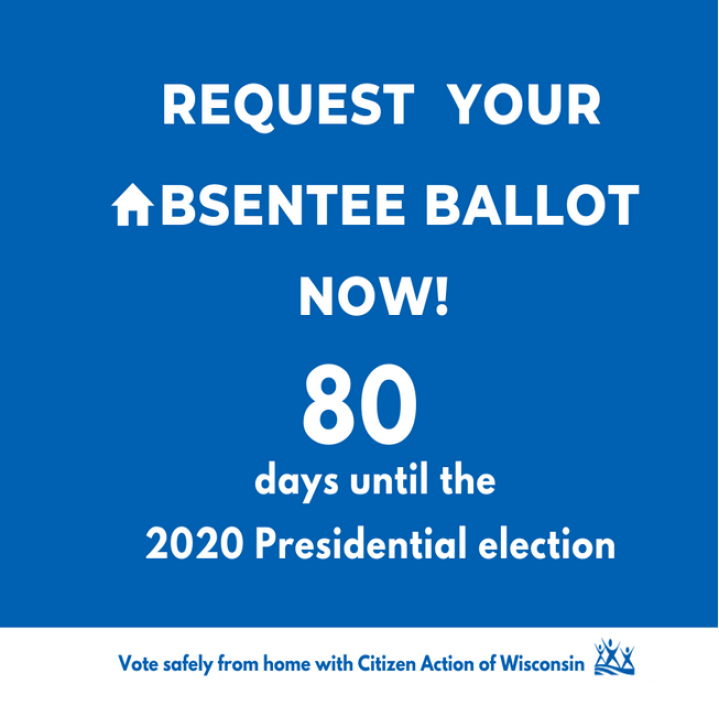 On August 29th the Citizen Action of Wisconsin Driftless Co-op will have its one year anniversary of organizing in the area.  In honor of the big day we will be hosting a virtual meeting for all our members, friends and allies.

This will be a chance to hear about all the work we have done to expand healthcare, protect voting rights, fight climate change and elect progressive candidates.  We will also be laying out our plans for the rest of the year.  Several members will be presenting on projects they have been working on with Citizen Action.

We encourage everyone to come out for this very special virtual meeting. Please use the link below to RSVP.  Space is limited so RSVP today!  Details on how to join this Zoom meeting will be sent once you RSVP.

Mark your calendars for our Summer Assembly on September 12th at 10am! This will be a chance to hear about all the work we have done to expand healthcare, fight the climate crisis and elect progressive candidates.  We will also be laying out our plans for the rest of the year.  Our Climate equity team and healthcare co-op will be presenting on projects they have been working on with Citizen Action. We will also have some local activists as guest speakers.

We encourage everyone to come out for this very special virtual meeting.  Please use the link below to RSVP.  Space is limited so RSVP today!  Details on how to join this Zoom meeting will be sent once you RSVP: //secure.everyaction.com/KEeaeyAvCki5n2lnloKXsg2 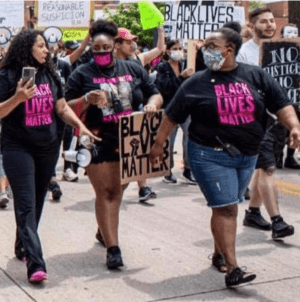 Over the past 4 years, the Northeast Co-op’s community partner Black Lives United has donated over 500 book bags filled with back to school supplies to Green Bay students in need. This year, we recognize the need to continue this educational support, especially with the increased time kids are spending at home. The goal is to give away 300 book bags filled with education supplies to be used in an at-home or school environment.

BLU is asking for a suggested donation of $40 (to cover the cost of a backpack and supplies; any amount monetary donations is GREATLY appreciated) OR to purchase a backpack and fill it with supplies from the district’s supplies list.

Organizing Co-op’s Working with People Across the State to Cut Carbon Emissions, Save on Energy Bills, and help to Create Good Jobs

Citizen Action of Wisconsin has helped convince multiple banks through a public campaign to offer green home upgrades, where the bank provides resources to help cut a home’s carbon emissions and utility bills that pay for themselves right away. This campaign began years ago in the North Central region. Since that time, we’ve helped homeowners access solar panels, cut their mortgage interest through a “green refinance”, and hire pro-climate contractors that treat their workers well. All while saving more immediately than they were before with nothing extra down.

Now, we have launched a project to help homeowners personally divest their money away from banks and utilities, back into the pockets of working people and towards the causes that matter. We can even show you how you can further live your values by showing you how you can reinvest in institutions that are specifically working to invest in the Black community, and that create good living wage jobs right here.

Fill out the “Green Home” fellowship application. Tell us more about your home, and after signing you’ll receive a link to schedule a 1-1 meeting to go over the math of whether or not this program can cut your utility bills, mortgage payments and significantly roll back your carbon emissions! Fill out the application here.

You will only be chosen if we are confident we can reduce costs and cut carbon emissions, with extra consideration for Citizen Action members and/or those from historically under-invested areas (especially rural and communities of color) and/or union members. You do not need to be a Citizen Action member for consideration. (Questions? Email [email protected] and/or [email protected]).

People who participate will be automatically signed up as a Citizen Action Organizing Co-op member at $20-per-month if we can show savings well in excess of $20-per-month after costs (effectively no cost). This allows us to continue working on issues that matter to you and our other members, while continuing to work on proactive campaigns, such as this one..

Citizen Action’s Robert Kraig was on a national Pacifica Radio Network program to discuss the Wisconsin primary elections, and the threat to the integrity of Wisconsin’s presidential election posed by Donald Trump’s assault on the post office. Listen here. Pacifica Radio Network has over 200 affiliated stations across the United States.

Citizen Action’s Robert Kraig was on the Jeff Santos Show to calm down anxious progressives about Joe Biden’s selection of Kamala Harris as his running mate. Listen here (it is in the second half of the podcast). The program, which originates from Boston, is replayed on the leading commercial progressive radio stations in the Madison and Milwaukee media markets. Citizen Action’s Battleground Wisconsin podcast/radio show is also featured on these stations every Saturday and Monday. 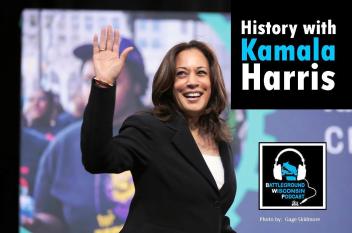 We lead with the historic selection of Kamala Harris as Joe Biden’s Vice Presidential candidate, the first African American women to ever appear on a major party ticket. Will it help Biden win in November? Is there any progressive unrest about the choice? We review Wisconsin’s partisan primary election this Tuesday, where progressives and many candidates of color swept a series of closely contested primaries. We focus in on Citizen Action co-op member Kristina Shelton’s huge victory in Green Bay and Citizen Action organizer Supreme Moore Omokunde’s win in Milwaukee. We discuss the latest MU Law Poll and a new WEAC Regon 7’s “Report Card” grading the opening plans of school districts in southeastern Wisconsin. Is your school district opening safely? Finally, we are joined by Citizen Action co-op member and state legislative candidate Emily Siegrist, to discuss her race and the rising prospects of Democratic pick ups in the previously deep red Milwaukee suburbs.

Attend Emily Siegrist’s Cycling with the Candidate event this Sunday, 8/15, 2pm, Brown Deer Park. Leave from Brown Deer Park and head north on the Oak Leaf trail to Foxtown Brewing for a beverage before returning back to the park. The route is approximately 10 miles round trip. Please RSVP at [email protected] Suggested donation is $50. Don’t forget, bring a mask and BYOB (bring your own bike!) 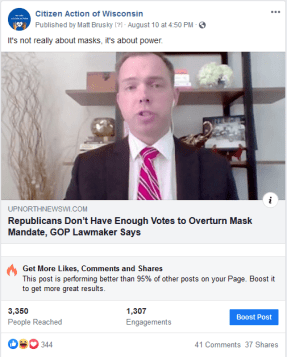