Is the GOP Trying to Steal Wisconsin for Trump? 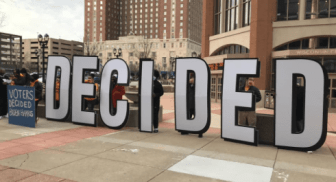 At a tumultuous Wisconsin Election Commission meeting Wednesday evening, GOP commissioners called into question all of the mail ballots in Milwaukee and Dane Counties applied for through the state’s own website! This paired with Trump’s overt attempt to strong arm the Michigan State Legislature intoto flaunting the will of voters, and one of Trump’s lawyers calling for battleground state legislators to do so, raises serious questions about the Wisconsin recount. Two Wisconsin Election Commissioners, Mark Thomsen and Chair Anne Jacobs, have said their strategy may be to use the recount to get before the conservative Wisconsin State Supreme Court to give the Legislature permission to name Wisconsin’s electoral college slate. The ploy seems to be a long shot, but we need to take it seriously.

Citizen Action is on top of the emerging story. 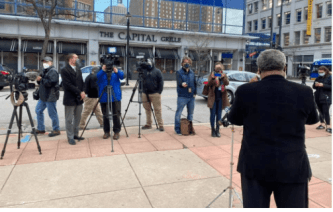 On our Battleground Wisconsin Podcast/Radio Show, we have an exclusive interview with Wisconsin Election Commissioner (and Citizen Action Board President) Mark Thomsen to discuss the GOP threat to the integrity of the Wisconsin election. In addition, Citizen Action Executive Director Robert Kraig discusses the GOP strategy to steal Wisconsin, and how it just might work, on a national radio program on the Pacifica Radio Network.

Citizen Action participated in a #BackOffMyBallot media event on Friday morning in Milwaukee with Souls to the Polls.

Citizen Action Thanks Our Election Heroes!

This November, Wisconsinites turned out in record numbers and made their voices heard. Poll workers risked their lives to make sure that the election process went smoothly and that each and every vote was counted.

Here are some ideas for organizations and individuals looking to thank an Election Hero:

We are once again, looking for healthcare stories.  Do you have a prescription drug that you really need but can barely afford?  Did you receive treatment recently and receive an unexpected healthcare bill?  Have you been treated for Covid but are now sitting on a giant medical bill?

You can make change by simply sharing your story with us.  Contact our healthcare organizer [email protected]

Citizen Action’s Robert Kraig was on the national Pacifica Radio Network to discuss the possible conspiracy by the Trump campaign to invalidate absentee ballots in Milwaukee and Dane County, and throw the election to Donald
Trump.

We have a special interview with Wisconsin Election Commissioner (WEC) Mark Thomsen about Trump and the GOP’s baseless accusations that every Wisconsin election clerk conducted illegal election activities. Wednesday evening, Republican WEC commissioners asserted, with no evidence, that Milwaukee and Dane County would illegally restrict access to GOP recount observers. Commissioner Dean Knudson said he was willing to throw out all absentee ballots requested online through WEC, which if it happened would likely swing the election to Trump. Our panel also discusses the escalating COVID-19 crisis in Wisconsin, including Governor Evers’ extension of the mask mandate and his new COVID-19 legislation. We welcome Racine Education Association president Angelina Cruz to discuss the very strong letter WEAC leaders sent to Gov. Evers and DHS Secretary designee Andrea Palm asking for clear state standards on in-person schooling. We also talk about other local elected officials who are receiving threats for proposing local health measures that would slow the spread of the pandemic. 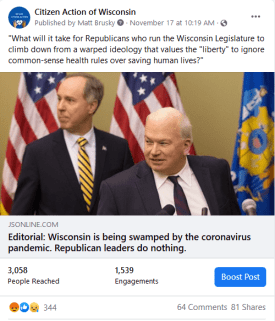 Team Biden vs the Radical Right