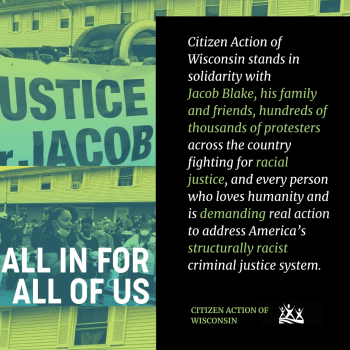 Citizen Action of Wisconsin stands in solidarity with Jacob Blake, his family and friends, hundreds of thousands of protesters across the country fighting for racial justice, and every person who loves humanity and is demanding real action to address America’s structurally racist criminal justice system.

As the Wisconsin Examiner reported: “Michael Graveley said his role was only to make a narrow legal decision over whether there was probable cause that the officers committed a crime.” Gravely and many legal analysts point out that it is extremely difficult to prove that a police officer in a shooting did not act in self defense, whether or not it’s true. 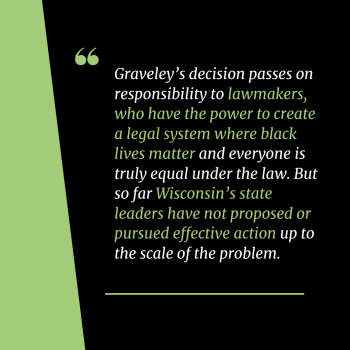 This means that the laws and legal precedents that have created the current self-defense standard have racist impact, as Black people continue to be shot and killed by law enforcement officers without legal consequences. This is a threat to the entire justice system, which cannot operate effectively when large segments of society justifiably do not have faith in its decisions.

Michelle Alexander’s penetratingly eloquent The New Jim Crow and Ibram X. Kendi’s brilliant pair of books Stamped from the Beginning and How to Be an Antiracist, call for every moral person to use their power to disrupt and unwind structural racism.

While DA Gravely may well be right that the case is unwinnable under current standards, this does not absolve him of moral responsibility. In the era of slavery and Jim Crow, heroic attorneys filed cases and DAs pressed charges that they knew would be shot down by a racist legal system. We should expect no less today. 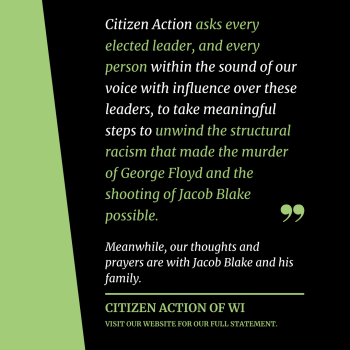 Graveley’s decision also passes on responsibility to lawmakers, who have the power to create a legal system where black lives matter and everyone is truly equal under the law. But so far Wisconsin’s state leaders  have not proposed or pursued effective action up to the scale of the problem.

For Professor Kendi, one can’t meet his definition of antiracist without both recognizing the deep racism in our society and in each of us, and taking effective action to replace racist structures. For him the defining mark of antracism is effective deeds, not words or personal reflection. All those with substantial power such as our political leaders, corporate leaders, and at a lesser level of power nonprofit leaders, and every person with love in their hearts for all humanity must do more.

Citizen Action asks every elected leader, and every person within the sound of our voice with influence over these leaders, to take meaningful steps to unwind the structural racism that made the murder of George Floyd and the shooting of Jacob Blake possible. Meanwhile, our thoughts and prayers are with Jacob Blake and his family.