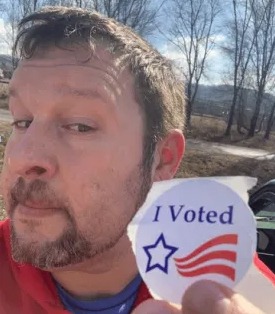 Ben Wilson, Southwestern Wisconsin Co-op Organizer
Ben Wilson is the  Citizen Action Southwestern Wisconsin Organizing Cooperative Organizer.  Ben grew up in Lansing Iowa right across the Mississippi River from the region he organizes in now, and through most of his twenties worked on marketing events from coast to coast which left him feeling unfulfilled and as though all he had accomplished was making major corporations more profits.  That’s why Ben got involved as a volunteer in the 2016 presidential campaign of Bernie Sanders.  He later took a job as a canvasser campaigning for Hilary Clinton and Russ Fiengold during the 2016 election, which broke his heart but strengthened his resolve to create a better tomorrow.  During the 2018 midterm election Ben managed more than 50 canvassers knocking doors across 12 counties working as a lead organizer for the group For Our Future, which runs a large canvassing operation across the state during major elections.