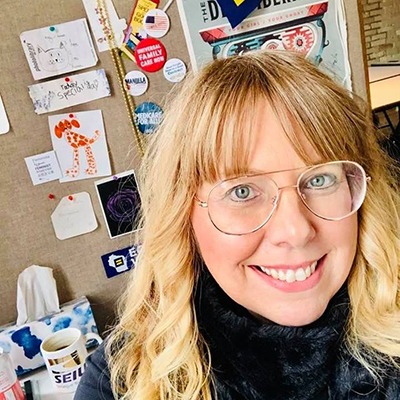 Karen Kirsch, Health Care for All Co-op Organizer (B.A. Mount Mary University). Karen is a native Wisconsinite originally from Port Washington, WI. She is a graduate of MATC with an Associate Degree in Human Services and a graduate of Mt. Mary University as an Art Education major.  Her father, Harvey Weber, worked in the Milwaukee area during the era of flourishing manufacturing and unions. Her household was a USW home and while her father was elderly during the Scott Walker union busting times, Karen became newly activated politically on his behalf as he always reminded her of his post depression era upbringing and how belonging a union changed his life. She’s worked for a myriad of Democratic candidates in the Southeastern Wisconsin area and most recently serving as deputy campaign manager for Julie Henszey, a 2018 Wisconsin state senate candidate and Milwaukee Co-op member.  Karen is also active at the local and statewide level of the Democratic Party and serves as an elected administrative board member. Karen became a Co-op member several years ago as she was saw the value in keeping issues alive and in the foreground during non-election years.She most recently worked in the advertising, marketing and PR world for a notable national advertising agency. Working on global brands with some of the most talented messaging people in the county has taught Karen the importance of attention to detail, deliberate and well thought out communication, framing and execution.  She is excited to bring this experience to the table in advancing the progressive agenda. At a young age, she was excluded from healthcare due to a pre-existing condition and that event led her to tune into the issue as she saw others that were even more impacted than her.  She believes healthcare is a right, not a privilege. The lack of it, sets people into a vicious and often deadly cycle. Today she lives in Greenfield with her partner, Robert Hansen and step-daughter, Abigail Hansen and their two dogs.  Coincidentally, Robert is also from a USW household, as his father Albin Hansen worked for a paper mill in Upper Michigan. Her household has a full fledged USW foundation and they will forever be grateful.