Walker’s election year plan impacts a tiny fraction of health consumers, is dwarfed by premium reductions in neighboring Minnesota, and does not make up for cost of his sabotage

After 7 years of working to sabotage the Affordable Care Act in Wisconsin, Scott Walker is making misleading claims about reducing health care costs just weeks ahead of a close election. The public has a right to know his real record on health care access and affordability.

First, Walker’s over-hyped claims of success on health care costs are classic election year fluff. Walker wants voters to believe that he has made progress on skyrocketing health care costs, when the vast majority of Wisconsinites will not see any reduction.

The initiative Walker is touting, so-called reinsurance, benefits less than 1% of Wisconsin’s health care consumers. This is because it does not provide any price relief for people who get their health care through their jobs, through Medicare, or BadgerCare. It only benefits the small number of people who buy health insurance on the Affordable Care Act marketplace who make too much money to receive federal affordability tax credits. Only 5% of Wisconsin health care consumers buy insurance on the individual market, and 83% receive federal tax credits which offset any premium increases.

Second, Walker’s election year hyperbole misrepresents his actual health care record. Even if we consider the one year premium decrease for a small number of Wisconsinites Walker is touting, his record of sabotage compares very unfavorably with neighboring Minnesota, which has embraced and built on the Affordable Care Act. According to a analysis of 2019 individual marketplace premiums conducted by Citizen Action of Wisconsin today, Minnesota’s premiums are decreasing for 2019 by double the amount that Wisconsin’s for a benchmark plan (13% vs 6%). As a result, the well know cost advantage Minnesota has over Wisconsin actually is increasing, from 45% more expensive in

Wisconsin in 2018 to 59% more expensive in 2019.” This means the average 40 year old Minnesotan who buys a benchmark plan on their own and does not qualify for a federal tax credit will pay premiums of almost $200 less per month than a 40 year old Wisconsinite. ($533 per month for premiums in Wisconsin vs. $335 in Minnesota for a 40 year old purchasing the benchmark plan on their own without a federal tax credit).

Third, Walker’s election year representations on health care do not take into account the cost of his sabotage of the Affordable Care Act. According to numbers compiled from independent research by Citizen Action, Walker’s actions have increased premiums on individual market by at least 17%, and Donald Trump’s sabotage of the ACA has increased premiums by at least 18%.

“The fact of the matter is that Scott Walker has never made meaningful health care reform a  focus of his administration, and Wisconsin families are paying the price with high premiums, skyrocketing deductibles, and unaffordable prescription medications,” said Robert Kraig, Executive Director of Citizen Action of Wisconsin. “No amount of election year spin can cover up Scott Walker’s abysmal health care record. Walker may find it politically necessary in an election year to pretend to care about affordability, but 7 years of sabotage reveals that he has played politics with the lives of Wisconsinites who are struggling to afford health care.”

In U.S. Senate debate Vukmir makes stunningly false claim that pre-existing conditions discrimination was not an issue before passage of the Affordable Care Act 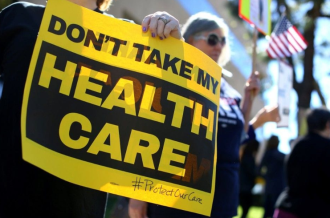 In a debate Monday evening U.S. Senate candidate Leah Vukmir made the startling assertion that before the passage of the Affordable Care Act (ACA) insurance discrimination against people with pre-existing conditions was prevented by federal law. This shockingly false claim contradicts both the historical record and the lived experiences of thousands of Wisconsinites who were subjected to discrimination before the ACA made it illegal.

In the debate Vukmir made the following statement (starting at the 6:30 mark in the video)

In Leah Vukmir’s alternative reality the issue of pre-existing condition discrimination, which has been a top tier public issue for over a decade, turns out to have been “a big lie” all along. Never mind the fact that public outrage of pre-existing condition discrimination is one of the principle reasons the ACA passed in the first place and that Republicans in Congress and President Trump failed in their attempt to repeal it last year. Never mind all of the cancer survivors and many others with serious or chronic health conditions across Wisconsin who have told their heart wrenching stories of the bad old days when they were denied health coverage when they needed it most. 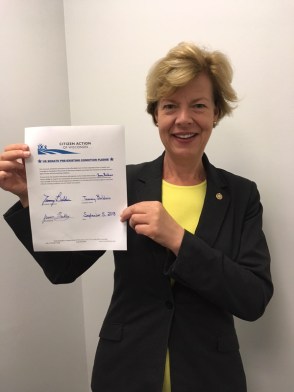 The fact is that before the passage of the ACA, it was legal for health insurance corporations selling on the individual market to deny coverage to people with pre-existing health conditions, charge them discriminatory rates, carve out parts of the body that would not be covered, sell substandard

insurance that did not cover expensive health conditions, and impose lifetime and annual limits. It was also legal to charge discriminatory prices to small businesses who had a single employee with a health condition.

In August Citizen Action of Wisconsin asked both U.S. Senate candidates to sign a pledge to protect people with pre-existing conditions. Senator Baldwin signed the pledge, while Vukmir never responded to our request.

“Leah Vukmir’s claim that pre-existing condition discrimination was never a problem would be laughable if it were not so dangerous to the lives and livelihoods of hundreds of thousands of Wisconsinites,” said Robert Kraig, Executive Director of Citizen Action of Wisconsin. “How can voters trust Vukmir to protect people from pre-existing condition discrimination when she denies that it ever existed?”