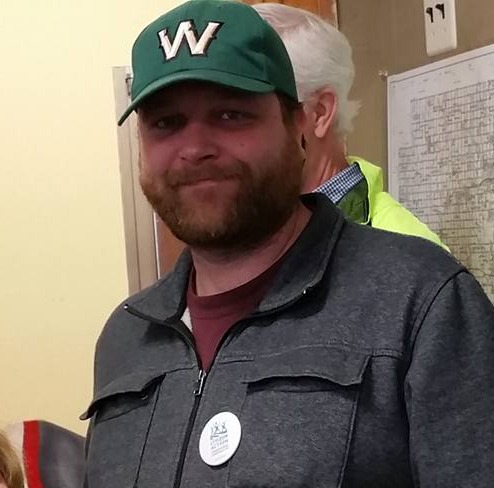 Joel Lewis, Organizer, North Central Organizing Co-op (B.S. Upper Iowa University, Associate’s at Northcentral Technical College). Joel graduated from Upper Iowa University with a double bachelor’s degree in Psychology and Social Work in 2010. Shortly thereafter, the passage of Act 10 happened, and the uprising in our State capitol was one of the results. Joel got involved in the recall efforts and has been organizing ever since. In 2011, We Are WI, Credo SuperPAC and Wisconsin Jobs Now arrived in Wausau, WI, where Joel was raised, and where he is currently raising his family. Joel was already very active with the Democratic party, but wanted more than just another meeting. These three groups offered that through direct action, organizing around issues and building campaigns. Joel’s dedication to these causes led to him being paid by Credo SuperPAC and then, OFA (Organizing for America) during the 2012 elections. He then was hired by Wisconsin Jobs Now in the beginning of 2013 to work in cooperation with Citizen Action of Wisconsin on a campaign to pressure Gov. Walker to accept the Medicaid (BadgerCare) money being offered through the Patient Protection and Affordable Care Act and then immediately after, Joel organized for the Fight for $15 and a Union movement. After being frustrated with the Marathon County Board for failing to pass a resolution urging the Governor to accept the BadgerCare money, and after they refused to even consider a living wage referendum or resolution, Joel ran for the County Board. He is currently serving his 3rd year (2nd term) on the Board. He also serves on the Education and Economic Development Committee, the Social Services Board, and the Aging and Disability Resource Center-Central WI Board (ADRC-CW-represented by members from four counties: Marathon, Lincoln, Langlade and Wood Counties) as a part of his duties to the County Board. In addition to the County Board, Joel serves on the Marathon County Central Labor Council AFL-CIO as a delegate for his union, OPEIU Local 9 and as a Trustee. He also serves as a consumer board member on the Board of Director’s for the Bridge Community Health Clinic (a Federally Qualified Health Clinic) in Wausau. He is also involved with the Citizens’ Climate Lobby and the Friends Committee on National Legislation (The Quaker Lobby group). Joel has a wife named Melissa Engels-Lewis, who is involved in environmental activism. Most recently she went to Standing Rock to take donations to the tribes and in the Summer of 2016, she and her family walked 4 days along the Enbridge pipeline (the organizers of this event walked for 33 days from Southern WI to Superior). She was also very involved in the fight against the Penokee Hills Gogebic Taconite mine. Joel and Melissa have 3 daughters, Shawna Engels, Haley Steffen and Carra Adair Lewis. Organizing and activism have become a part of their daily lives. The North Central Organizing Co-op is comprised of members from 10 counties: Wood, Portage, Marathon, Lincoln, Langlade, Oneida, Vilas, Price, Rusk and Sawyer Counties. He is very excited to have people from the Northwoods, deciding what needs to be worked on.