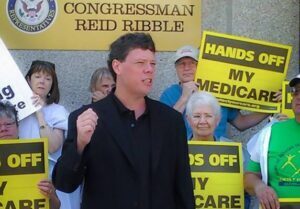 Dr. Robert Kraig, Executive Director (PhD, University of Wisconsin-Madison; M.A. University of Georgia; B.A. University of Pittsburgh). Robert took the helm in September 2009 at the height of the Great Recession, when Citizen Action was in virtual bankruptcy, and has led a dynamic team of organizers in rebuilding it into one of the leading progressive forces in Wisconsin. Robert is a leading strategist in the Wisconsin progressive movement, and is especially known for developing innovative approaches to strategic communication and issue campaign design and implementation. He has also appeared on major national and international media outlets such as Fox News, MSNBC, Al Jazeera, Democracy Now, many syndicated radio programs, and has been quoted in national newspapers a nd magazines such as the New York Times, Washington Post, In These Times, The American Prospect, The Atlantic, and Mother Jones. He is also a regular panelist on the local PBS television program International Focus. Robert is the author of several major academic articles on American political rhetoric in Rhetoric & Public Affairs and other academic journals and collections. His book, Woodrow Wilson and the Lost World of the Oratorical Statesman (Texas A&M Press), topped a Wall Street Journal list of the five best books on presidential rhetoric. Robert also occasionally teaches graduate rhetoric seminars at University of Wisconsin-Milwaukee. Robert is the former Wisconsin State Council Director for SEIU, where he helped develop and win the passage of several policy innovations which enabled over twelve thousand low-wage workers to form unions. He is also the former Policy Director for the Wisconsin Blueprint Project, where he cut his teeth on devising strategies to build-out progressive infrastructure. He grew up in Oak Park, Illinois, and has lived in Wisconsin since 1989.