STATEWIDE: On a media webinar today Citizen Action of Wisconsin was joined by State Senator La Tonya Johnson to release a new report showing the economic consequences of a failure of Congress to extend the $600-per-week benefit for out-of-work and partially working Wisconsinites. Without a renewal by Congress and the President, the benefits will expire on Saturday in Wisconsin. Republicans in Washington remain gridlocked, and will not make a counter proposal to House Democrats (who passed an unemployment extension in May) until next week at the earliest.

A video recording of the news conference is available here.

The report breaks down the economic impact of cutting the $600-per-week federal funding stimulus for major Wisconsin metropolitan areas. Over 200,000 Wisconsin unemployed workers and underemployed workers participating in Work-Share programs will lose more than half of their family incomes. Taking this money out of the pockets of working families across Wisconsin will have a cascading impact on local economies, cutting demand for groceries, auto repairs, and other basic services, damaging already struggling businesses and forcing additional layoffs. It will also force many to go without enough food and other basics, and spark an unprecedented wave of evictions and foreclosures.

Figure 1: Percent of Income Reduction from Drop in UI Benefits

* – Unemployment insurance amount is based on the quarterly earnings, a combination of hours and hourly wage. Data gathered from Department of Workforce Development’s Weekly Benefit Rate Calculator. UI weekly benefits are capped in Wisconsin at $370 per week at most.

Figure 2: Statewide and Metropolitan Economic Impact of Not Extending the $600/Week Unemployment Stimulus Until the End of 2020

** – Methodology: Using the state-level calculation of job loss from the Economic Policy Institute, we estimate the local impact through adjusting for the proportion of unemployed Wisconsin workers eligible for the $600-per-week benefit by multi-county Metropolitan Statistical Area (MSA). MSA’s are preferred as they better capture the flow of money between adjacent communities and local economies.

*** – Based on DWD UI Week 26 estimate of weekly claim recipients by county, grouped by MSA, multiplied the number of weeks remaining in 2020 and by $600 per week. Figures may be low, as they do not count residents waiting for unemployment determinations and UI funds.

Figure 3:Number of Residents Unemployed by County, as of DWD Week 26, and Estimate of Jobs at Risk Per County from End of $600 Unemployment Stimulus.

* – Methodology: Using the state-level calculation of job loss from the Economic Policy Institute, we estimate the local impact through adjusting for the proportion of unemployed Wisconsin workers eligible for the $600-per-week benefit by county. While county level spill-overs no doubt occur (money is not only spent in the county one lives in) we assume spillovers occur in both directions between counties.

*** – DWD statistics do not account for the county of origin for all UI recipients. 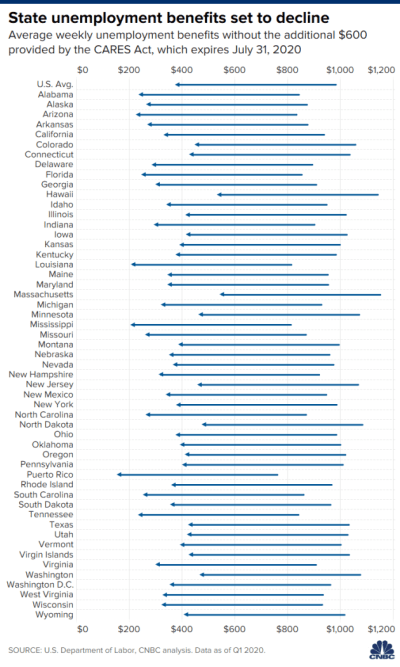 “It is absolutely stunning that in the middle of a pandemic-induced depression, conservatives in Washington are forcing the cut-off of the unemployment payments that keep millions of working families afloat,” said Robert Kraig, Executive Director of Citizen Action of Wisconsin. “The important data in this release document the needless economic pain that will be inflicted on Wisconsin working families in every corner of the state, and the additional working families. The data also document the cascading impact this cut-off of support will have on tens of thousands of additional working families who will also lose their jobs as a consequence. With enhanced unemployment payments ending next week in Wisconsin, and Republican in Washington in gridlock, the State Legislature must come back into immediate emergency session. This is a time for leadership, and it is time for conservative politicians at the federal and state level to start doing their jobs,” Kraig concluded.

“For many families the extra 600 federal unemployment benefits means the difference between financial security during a time when they are struggling due to no fault of their own, and the risk of losing their home”, said State Senator La Tonya Johnson. “We need our leaders at both the state and federal level to take immediate steps to support Wisconsin families, including removing red tape that makes it difficult to successfully navigate the UI system and maintaining the $600 federal lifeline that families-and our economy- depends on.”

The report shows that out-of-pocket costs for anti-opioid medications are often unaffordable on the private health insurance marketplace, costing as much as 72 times more than they do for BadgerCare enrollees. The report provides an additional critical policy consideration for lawmakers to weigh as they deliberate over the Governor’s proposal to accept federal Medicaid dollars to expand BadgerCare.

On a media call on Oct 31st, Citizen Action of Wisconsin and the Wisconsin Federation of Nurses & Health Professionals released a new analysis which has major implications for the high profile health care debate in the 2018 election. We were joined on the audio news conference by State Senator LaTonya Johnson and State Rep. Chris Taylor. Listen to the entire audio here.

The analysis, based on just released federal data crunched by Citizen Action, shows that Governor Walker’s refusal to build on the Affordable Care Act is forcing Wisconsinites to pay thousands more for health insurance on the individual market. In some high cost regions of the state, Wisconsin families are paying over $24,000 per year more per year! END_OF_DOCUMENT_TOKEN_TO_BE_REPLACED

14,000 jobs deficit for existing corporate tax credits and loans greater than the direct jobs claimed for the Foxconn deal

STATEWIDE: On a media call today Citizen Action of Wisconsin, State Rep. Amanda Stuck, and State Rep. Jonathan Brostoff released a new analysis of Wisconsin Economic Development Corporation (WEDC) data showing that the troubled economic development agency has an extremely poor record of holding corporate recipients accountable for their jobs promises. The analysis, which comes from the agency’s own self-published data, provides additional evidence that WEDC is completely unqualified to manage the gigantic Foxconn deal, which would be by far the largest job creation tax credit program ever issued by an American state. Audio of the call can be found here. END_OF_DOCUMENT_TOKEN_TO_BE_REPLACED

Throughout his tenure, Governor Walker has recklessly taken affordable health care away from low income Wisconsinites, or left them vulnerable to losing all coverage, often at higher cost to state government. He has also consistently sided with large for­ profit insurance companies, using his power to sabotage consumer ­friendly regulations designed to rein in abusive industry practices and windfall profits. In addition, his policies have raised the cost of health insurance in Wisconsin, especially compared to states like Minnesota that have used the policy tools made available by ACA. As President, Walker’s power to disrupt health care access would be far greater than it is as Governor. END_OF_DOCUMENT_TOKEN_TO_BE_REPLACED

Our analysis looks at the self-reported “jobs projected” numbers claimed by WEDC compared to the population of each individual county. WEDC defines “jobs projected” as jobs it had some hand in creating, although the agency does not provide clear definitions and analytical support for how it makes these determinations. For example, for a $26,210 grant by WEDC to Precision Paper Converters, LLC in Outagamie County, WEDC estimates 45 “jobs projected.”   Although we have significant reservations about these claimed impacts, for the purposes of this report we take WEDC data at face value, and examine whether or not economic benefits are being fairly and proportionally distributed to every region of Wisconsin. END_OF_DOCUMENT_TOKEN_TO_BE_REPLACED

END_OF_DOCUMENT_TOKEN_TO_BE_REPLACED

Madison: A scathing new report released this morning by the Legislative Audit Bureau gives the Wisconsin Economic Development Corporation (WEDC), the state’s lead job creation organization, a failing grade on every basic measure of program administration and accountability. According to the report, the organization’s reporting and management are so shoddy that it is not possible to “assess the effectiveness of WEDC’s economic development programs.”

The partially privatized organization was created in 2011 by the Walker Administration over the protests of Citizen Action of Wisconsin and coalition partners who warned it would lack accountability and transparency. END_OF_DOCUMENT_TOKEN_TO_BE_REPLACED