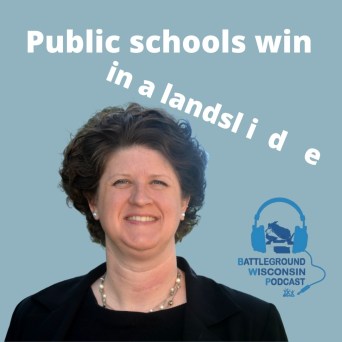 We review the huge victory for public education in the Department of Public Instruction race, and the immediate threat by Assembly Speaker Robin Vos to take it out on our schools. We discuss the shockingly successful GOP effort to take down progressive school board members who follow the science and our educators by only supporting the safe reopening of schools. Is this a new Republican wedge issue for moderate voters they will use in 2022 in state and federal races? Claire educates us on the Biden Administration’s decision to permanently end health-care denying work requirements to receive Medicaid. We talk about the COVID variants taking off with big spikes in 5 states (and counting), and the GOP use of the fraudulent vaccine passports issues to increase vaccine hesitancy, threatening to further delay heard immunity. Robert discusses Trump’s outrageous scamming of his own supporters, and its copycats in the Republican Party. We close by welcoming Hannah Faris from In These Times magazine to talk about the launch of a new rural focused reporting project called, “the Wisconsin Idea.” The project is a collaboration with People’s Action and Citizen Action of Wisconsin. 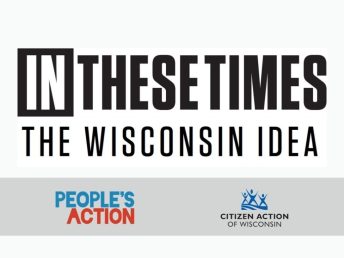 More information on In These Times “Wisconsin Idea” project with Citizen Action and People’s Action. 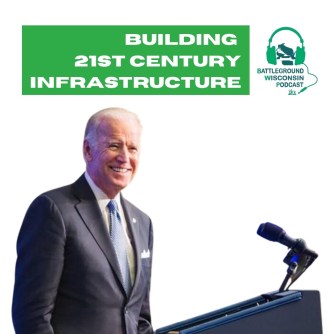 We dive into the exciting details of President Biden’s historic Build Back Better plan released Wednesday. Will it pass? Does it go far enough? Back in Wisconsin politics, we discuss next Tuesday’s Spring General Election and encourage listeners to volunteer this weekend for Jill Underly and local endorsed candidates. The panel evaluates the Wisconsin Supreme Court’s 4-3 decision to overturn Gov. Evers’ mask mandate. Is there a valid legal argument or are right-wing justices acting like politicians in robes? Claire updates us on this week’s Citizen Action Healthcare Week of Action focused on important state budget priorities. We also shine a light on Legislative Republican’s sham hearings peddling conspiracy theories about the 2020 election.

CONTACT your state legislators in support of our healthcare agenda.

We look at Sen. Ron Johnson’s lockstep alignment with Trump’s Q’Anon base, and his new found national infamy among moderates and progressives. Has he gone off the deep end or is this smart politics in Trump’s GOP? We discuss next week’s important Healthcare Week of Action focusing on critical healthcare priorities in the state budget. Claire details the events and your opportunity to get involved, including talking to your state legislators. We expose the Legislative Republican effort to downplay the importance of COVID-19 vaccination at a time when health officials are trying to get as many people as possible vaccinated. We close by welcoming Mike Browne, Deputy Director of A Better Wisconsin Together (ABWT) to discuss how two of their identical open records requests to GOP state legislators produce vastly different results, and what is says about transparency in Wisconsin government.

Sign up for Healthcare Week of Action Lobby Day. 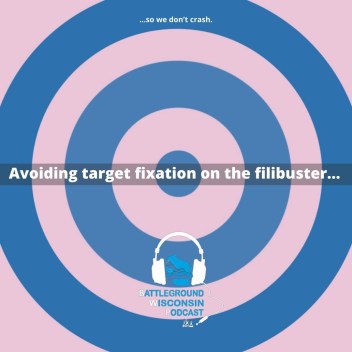 We weigh in on two national issues, first the horrific shootings in Georgia that appear to be yet another hate crime against the AAPI community, and the looming battle over the Senate filibuster and the future of the Democratic agenda. We discuss Speaker Vos’s declaration this week that the Legislation will reject the very popular plan to accept available federal money to expand BadgerCare, turning down $1.6 billion dollars supercharged by the rescue package, denying health care to the working poor during and pandemic. Is Vos serious with dozens of potentially vulnerable Republican state legislators weigh their fate heading into redistricting or it a bluff? Vos also plays scrooge yet again, declaring the Assembly is not willing to suspend a one week waiting period for unemployment benefits despite 100% federal funding in the rescue package. In yet another embarrassment, Legislative Republicans shamefully “honor” racist demagogue Rush Limbaugh while refusing to honor Black History Month. In other news, Foxconn, the white elephant of Racine County, says they might make electric cars… or maybe a monorail. Will they ever make anything that Donald Trump and Scott Walker promised in return for billions of state money?

Links:
Senate Democrats plot new effort to gut filibuster but lack votes for major overhaul.
Democrats seize on Biden’s embrace of changing the filibuster.
Joe Manchin just took an important filibuster reform off the table.
Senate Republicans honor Rush Limbaugh and refuse to recognize Black History Month.
Vos says no to plan that would provide Wisconsin with $1.6 billion for health care.
Foxconn said it will announce what will be made at the Wisconsin facility by July.
Vos expresses reservations about again suspending waiting period for unemployment benefits.

Battleground Wisconsin · Biden Just Made it Harder for GOP to Turn Down BadgerCare Expansion
This week we discuss the historic passage of the American Rescue Plan, universal GOP opposition, and its implications in Wisconsin. In addition to the massive aid it provides to working people, the new law puts an extra $1.6 billion dollars on the table if Wisconsin finally passes BadgerCare Expansion. Will Legislative Republicans still stand in the way? After reviewing major new agenda items that are moving in the next stage of Biden’s reform agenda such as labor law reform, voting rights, and a massive green infrastructure plan, we have an exclusive interview with Wausau Mayor (and Citizen Action member) Katie Rosenberg on the city’s exciting new guaranteed income pilot program.
Listen Now – Episode #483
Download Mp3
Press Clips
Battleground Wisconsin · Busting the filibuster or bust

This week the U.S. House passed a landmark voting rights bill, which will could set up the first major filibuster fight in the U.S. Senate. Are progressive Democrats ready for this fight and similar battles on the $15 minimum wage, immigration reform, climate transformation, a major jobs and infrastructure bill, and other key pieces of Biden’s agenda? Will centrist Democratic Senators yield to majority rule by ending the filibuster, or will they block the progressive reform Democrats promised voters? QAnon Ron Johnson appears ready to lead the Senate Republican charge to block COVID relief for Americans, and the FBI shoots down his embarrassing theories about the Capital insurrection. We also preview the upcoming congressional fight for serious labor law reform which starts next week in the House. We close by welcoming State Representative Kristina Shelton and State Representative Francesca Hong’s chief of staff, Nada Elmikashfi, to discuss the new Economic Justice Bill of Rights for All Wisconsinites that was introduced this week.
Listen Now – Episode #482
Download Mp3
Press Clips

Sen. Ron Johnson gushed bizarre conspiracy theories during a closely followed Senate hearing on the Capital insurrection, bringing national shame to himself and the Badger State he purports to represent. Is our senior senator off his rocker, or is he making a cynical ploy for the voters of wannabe authoritarian Donald Trump? State Representative Supreme Moore-Omokunde joins us to discuss a new dump of voter suppression bills by legislative Republicans. Has the GOP given up on democracy and majority rule? Claire details the on-going racial inequity in the distribution of COVID vaccines nationally and in Wisconsin. Do politicians have the courage to insist on a just vaccine distribution or is it more business as usual? A new unemployment bill with a poison pill moves in the Legislature and the fight for a $15/hour minimum wage takes center stage in Congressional COVID relief.

We discuss the bold two year state budget released this week by Governor Evers which includes major healthcare proposals like a BadgerCare Public Option, Climate reforms, and other major progressive policies. Does the Governor’s move towards the progressive wing of the Democratic Party show the power of public mobilization and organizing? We review Sen. QAnon Ron Johnson’s shameful week denying the armed insurrection on January 6. Is our wayward Senator hell bent on making himself a national laughing stock? Switching to the Biden Administration, we discuss a very important opportunity for progressives to pass an increase in the minimum wage to $15 in the next COVID relief bill. Finally, a new study released Thursday found the U.S. lost a whole year of life expectancy in 2020.

Battleground Wisconsin · Ruthlessness: The 10th Anniversary of Act 10
During the tenth anniversary of Act 10, we consider its legacy, what it says about the ruthlessness of modern conservatism, and the continuing ramifications of historic protests it sparked. We dig into a number of major state and federal issues, including the latest attacks on the mask mandate, a bill in Congress that would supercharge the ACA, and Governor Evers pre-budget announcements on BadgerCare Expansion, Marijuana Legalization, and Prescription Drug reform. Do these initiatives bode well for a more progressive state budget? We look at some huge federal issues in the heady early days of the Biden Administration, including COVID relief, impeachment, and protecting the housing rights of the LGBTQ community. Finally we raise concerns about the wave of anti-Asian violence in the U.S. sparked by right-wing rhetoric, and a rogue ICE which is flaunting President Biden’s executive orders and continues to follow Trump’s immoral deportation policies.
Listen Now – Episode #479
Download Mp3
Press Clips

Progressives have more influence in the Joe Biden’s Washington than we have had since the 1960s, but are we prepared to translate our outside power into the governing power we need to win bold reform? In this special edition of Battleground Wisconsin, we discuss how the progressive movement must evolve to meet our moment with two national organizing strategists, George Goehl, the Director of People’s Action and Bree Carlson, the Deputy Director of People’s Action. 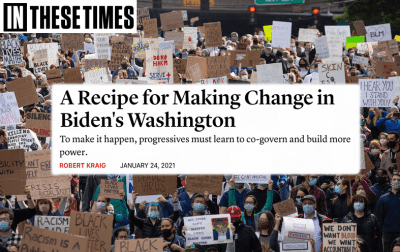 Read In These Times article on the same subject.