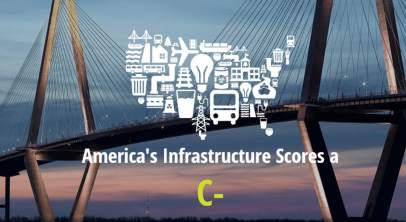 Wisconsin Democratic Governor Tony Evers inherited a polarized political environment. And, he shares power with a dysfunctional GOP-led legislature, disinterested in addressing long-term costly challenges. The Wisconsin Section of the American Society of Civil Engineers issued a 2020 Report Card for Wisconsin’s infrastructure. The overall GPA is only a C (“mediocre requires attention”). The specifics are damning.

Roads earned a D+: “More than one-third of these roads are in fair or below condition and deterioration is likely to continue over the next 10 years. …Deficient roads cost drivers $6 billion annually due to wear and tear on vehicles, wasted fuel due to congestion and the overall cost of crashes on roadways.”

Bridges earn a C+: Wisconsin has “more than 1,000 bridges … that are considered structurally deficient. … 1,955 bridges in Wisconsin that require repair, with an estimated price tag of $14 billion.”

Dams earn a C+: “Nearly 200 dams are considered ‘high hazard’ meaning loss of life would be probable should the dam fail. The annual (state) budget for dam safety is approximately $750,000 per year … . However, increased resources are needed to ensure public safety and minimize economic impact from future dam failures.”

Drinking water earns a C-: Wisconsin “must contend with aging water treatment and distribution systems … . Lead, bacteria, nitrates, (PFAS – toxic chemicals), arsenic and radium are some of the water quality concerns … . It is estimated that $8.6 billion will be needed to address infrastructure deficiencies over the next two decades… . Increased investment in drinking water infrastructure is needed (for) safe and reliable water supply for future generations.”

Help may be on the way. Wisconsin Democratic Senator Tammy Baldwin tweeted: “We need a bold economic plan and POTUS has put one forward that will create jobs, put people back to work and rebuild economic security for working families.” President Joe Biden is sending Congress the American Jobs Plan to address the problems outlined by the American Society of Civil Engineers and much more. He said: “It’s a once-in-a-generation investment in America (including Wisconsin), unlike anything we’ve seen or done since we built the Interstate Highway System and the Space Race decades ago.”

Millions of well-paying jobs will be created to rebuild our infrastructure, mitigate climate change impact and bring all Americans into the twenty-first century. Biden pays for his plan by increasing the corporate tax rate, closing tax loopholes and making certain all profitable corporations pay for their use of infrastructure. Biden said: “We can do this. We have to do this. We will do this. … This is the United States of America.”