Get more information about voting absentee for the April 7th election.

Among its results, the Survey found that:

This devastating new report on the state of health care affordability in Wisconsin should be a wake-up call to Wisconsin lawmakers, who in the current legislative session devoted virtually no attention to addressing the skyrocketing cost of medical services, medications, and health insurance. The extensive opinion research that serves as the basis for this report is the first deep dive in many years into the lived experience of Wisconsinites in coping with our health care system.

It establishes beyond all doubt that there is an affordability crisis in every region of the state is reaching a breaking point, and demands bold and immediate action from state government. There are many critical data points in this report, which should be must-reading for all state policymakers.

The top two findings that jump out for me the most are the stunning findings that nearly half of all Wisconsinites have gone without care or medications because they could afford it, and that health care affordability is by far the top public issue, easily beating the economy and taxes.”

Below are links to Data Briefs with statewide and regional survey results.

Cancelled Events due to Cornavirus!

The Choice for Wisconsin Supreme Court is Clear! Vote for Jill Karofsky on Tuesday, April 7th.

On Tuesday March 7th Citizen Action of Wisconsin members joined La Crosse’s mayor Tim Kabat, the Sierra Club, the League of Conservation Voters and RENEW Wisconsin to announce the rollout of a brand new tool kit designed to help Wisconsin resident reduce their carbon emissions.  This tool kit is the culmination of a year’s worth of work to build a plan to fight climate change.

Nick Nichols, the retired sustainability coordinator for La Crosse County, said switching to cleaner energy sources could bring 160,000 new jobs to the state. Nichols added that Wisconsin spends about $14 billion a year importing energy resources from other places, and argues that using cleaner energy will save money. “We’re not doing this because it’s nice and warm and fuzzy, and we’re all a bunch of tree-huggers,” Nichols said.

La Crosse is taking big steps toward becoming carbon free in its energy use by 2050, according to Mayor Tim Kabat. The mayor said efforts by city departments to use cleaner energy sources has dropped City Hall’s carbon footprint by 30 percent in just 11 years. Kabat added that plans are in the works to install solar panels at City Hall, the La Crosse Center and the Main Street Library.

The survey asks (1) whether Citizen Action should endorse in the Presidential Primary and (2) if so, who would be your top choice?

l local Citizen Action of Wisconsin members were on hand to protest Mike Pence’s planned visit to La Crosse on Thursday March 5th.  This rally and press event was hosted by our friends at the Wisconsin Democratic Party.

We want to thank everyone who was able to make it to the event.  Thank you for using your voice and your power to protect healthcare and women’s rights!  Stay tuned for future mobilization efforts and days of action across the Driftless region.

The Chair for the NC Organizing Co-op, Don Dunphy is a member of the First Universalist Unitarian Church in Wausau. He is also a member of the League of Women Voters. Through the social justice committee for his Church, our Co-op’s Steering Committee, and in cooperation with the LWV, he organized voter registration tables at Nicolet Technical College (Rhinelander), Northcentral Technical College (Wausau), and UWSP – Wausau on 10/10, 10/11, and 10/12 from 10 am to 2 pm. 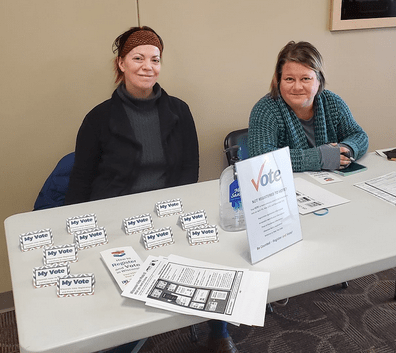 Several Co-op members, as well as members of the LWV and Don’s Church ran the tables. Don floated between locations to ensure that they ran smoothly. They had a very positive response. A couple of weeks back, Don Dunphy and Melissa Engels-Lewis were hired on as canvassers to do Deep Canvasses, in the Wausau and Stevens Point areas. After checking in on tables, Melissa and Don went out together, with Don’s partner, Ruthann driving, and knocked doors.

Our panel discuses of the coronavirus pandemic, which has resulted in the declaration of a state of emergency by Governor Evers, cancelled in person classes at many universities, and resulted in the suspension of the NBA season. We focus on the dysfunctional response from the Trump Administration to the outbreak, including the lack of testing, its cost to patients, and the president’s error riddle and xenophobic speech to the nation. We welcome Lynn Quincy, director of the Healthcare Value Hub, to talk about a new study conducted in partnership with Citizen Action that shows a majority of Wisconsinites across party lines are concerned about the high cost of healthcare. avoid needed care due to cost, and support fundamental reform. We discuss the latest news in the Democratic presidential primary after another big week for Joe Biden and yet another attempt to purge Wisconsin’s voter roles by the right.